In 1916, 1,000 leading American scientists were randomly chosen from American Men of Science and 42% believed God existed, 42% disbelieved, and 17% had doubts/did not know; however when the study was replicated 80 years later using American Men and Women of Science in 1996, results were very much the same with 39% believing God exists, 45% disbelieved, and 15% had doubts/did not know.[65][174] In the same 1996 survey, scientists in the fields of biology, mathematics, and physics/astronomy, belief in a god that is “in intellectual and affective communication with humankind” was most popular among mathematicians (about 45%) and least popular among physicists (about 22%). In total, in terms of belief toward a personal god and personal immortality, about 60% of United States scientists in these fields expressed either disbelief or agnosticism and about 40% expressed belief.[174] This compared with 58% in 1914 and 67% in 1933

Perspectives on Scientism, Religion, and Philosophy Provided by Parapsychology, Journal of Humanistic Psychology, 1992

Thomas A. Edison (1847 – 1931), the prolific inventor who held 1200 patents:
“My utmost respect and admiration to all the engineers, especially the greatest of them all: God.”

Carl Ludwig Schleich (1859 – 1922), famous surgeon, pioneer of local anesthesia:
“I became a believer in my own way through the microscope and observation of nature, and I want to contribute, insofar as I can, to the full harmony between science and religion.”

Guglielmo Marconi (1874 – 1937), inventor of wireless telegraphy, Nobel Prize 1909:
“I declare it proudly: I am a believer. I believe in the power of prayer, and I believe not only as a Catholic, but also as a scientist.”

New advances in mind-consciousness development and remote viewing communications are introducing changes in our traditional paradigms of science. Results are now overwhelmingly confirming that we are living in a quantum world with extended spacetime models working with cosmological constants in a multiverse. The power of consciousness is clearly able to work directly with nonlocality, revealing the ability to sense and know objects at a great distance, as well as influence targets. In this interconnected world, the observer is not aloof nor isolated from the world, but connected with this spacetime and other dimensions of understanding.

Scientism, When science becomes a religion

Scientism as a Belief System

It may seem strange to talk about science in these terms. Science is supposed to be neutral and objective and free from beliefs. The role of scientists is to investigate the structure and laws of natural phenomena and to conduct research and advance knowledge. Science is ideally an open-minded and open-ended process, where theories are continually tested and updated based on evidence.

It’s true that there are many scientists who work diligently without pondering over the philosophical implications of their work, and without consciously adopting any beliefs. It’s also true that some scientists are genuinely open-minded and willing to revise their beliefs when confronted with evidence. But as the science festival illustrated, for many people, science has become associated with a particular worldview, which is often maintained and defended in a similar way to a religion.

This is the worldview of materialism, which holds that matter is the primary thing in the universe, and that anything that appears to be non-physical—such as the mind, our thoughts, consciousness, or even life itself—is physical in origin, or can be explained in physical terms.

Materialism holds that human beings are just biological machines and that…”         For more:click here.

Yet, the word “science” comes from the Latin word “scire” which means to know. “Science” is supposed to be a systematic, organized way of investigating the world. The catch is when specialized learning turns into a dogmatic worldview, it then becomes an end-in-itself — distorting what might have resulted in a more holistic truth.

Standard dictionary definitions include the following applications of the term “scientism”:

Scientism is a term used to describe the universal applicability of the scientific method and approach, and the view that empirical science constitutes the most authoritative worldview or the most valuable part of human learning—to the exclusion of other viewpoints. It has been defined as “the view that the characteristic inductive methods of the natural sciences are the only source of genuine factual knowledge and, in particular, that they alone can yield true knowledge about man and society”.[1]

The term “scientism” frequently implies a critique of the more extreme expressions of logical positivism[2][3] and has been used by economists such as Friedrich Hayek,[4] philosophers of science such as Karl Popper,[5] and philosophers such as Hilary Putnam[6] and Tzvetan Todorov[7] to describe (for example) the dogmatic endorsement of scientific methodology and the reduction of all knowledge to only that which is measurable.[8] Tom Sorellprovides this definition of scientism: “Scientism is a matter of putting too high a value on natural science in comparison with other branches of learning or culture.”[9] Philosophers such as Alexander Rosenberg have also appropriated “scientism” as a name for the view that science is the only reliable source of knowledge.[10]

Scientism may refer to science applied “in excess”. The term scientism can apply in either of two senses:

Until the nineteenth and even early twentieth century, it was common for scientists to have religious beliefs which guided their work. In the seventeenth century, the design argument reached its peak popularity and natural philosophers were convinced that science provided evidence for God’s providential creation. Natural philosopher Isaac Newton held strong, albeit unorthodox religious beliefs (Pfizenmaier 1997). By contrast, contemporary scientists have lower religiosity compared to the general population. There are vocal exceptions, such as the geneticist Francis Collins, erstwhile the leader of the Human Genome Project. His book The Language of God (2006) and the BioLogos Institute he founded advocate compatibility between science and Christianity.

1 month ago
“According to science, we owe the universe to the holy creative Trinity, called Inert Matter, Senseless Force, and Blind Chance.” (The Secret Doctrine, Vol. 1, pg. 505)
The radical philosophical implications of quantum physics, although they are still controversial, suggest that (1) objects are intimately interconnected, (2) the observer and the observed are interdependent, and (3) consciousness plays an active role in observation. These new implications of quantum physics have prompted some physicists to interpret modern physics from the perspective of mystical worldviews. From such a perspective, some conceptual problems and paradoxes of quantum physics can be resolved. However, while these interpretations may be compatible with the evidence of quantum physics, they have not been established by scientific evidence and remain controversial.
Much of his early work on the subject centers on what he calls “veiled reality,” a hidden yet unifying domain beneath what we perceive as time, space, matter, and energy

The temptation to overreach, however, seems increasingly indulged today in discussions about science. Both in the work of professional philosophers and in popular writings by natural scientists, it is frequently claimed that natural science does or soon will constitute the entire domain of truth. And this attitude is becoming more widespread among scientists themselves. All too many of my contemporaries in science have accepted without question the hype that suggests that an advanced degree in some area of natural science confers the ability to pontificate wisely on any and all subjects.

Wave-particle duality, Schrödinger’s cat, the uncertainty principle, non-locality, instantaneous action-at-a-distance, a roll-the-dice universe—there are many mysterious ideas in quantum physics. A clear understanding of these ideas and their implications is given here.

The site is intended for both scientists and non-scientists. The main text is written for non-scientists, with an emphasis on clarity, while the more technical supporting arguments are given in appendices.

What makes our approach different? There is a set of principles that can be deduced from our ordinary perceptions of the world plus the mathematics of the theory. (These are stated in plain, non-mathematical language.) In other treatments, the power of all these principles together is not fully exploited. If you look at their cumulative implications, however, you find they eliminate most of the mysteries connected with quantum physics. Wave-particle duality, Schrödinger’s cat, the uncertainty principle, the double slit experiment, and non-locality all become clearly understood.

SortEditShare
“A masterly guide to the frontiers of science, belief and exploration. Carter leads us through the interplays of dogma, speculation and empirical research in a stimulating way. The controversy is intense because the implications for the scientific understanding of nature and of mind are so far reaching. If you want to know the current state of play, this is the book for you.” –Rupert Sheldrake, Ph.D., author of The Presence of the Past

Scientific and Medical Network
Book of the Year Award Winner 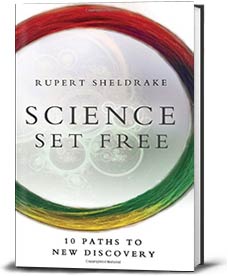 “Sheldrake drags ten of the most powerful dogmas out of the basement and into the light of day; and does science, humanity and the world a large, a considerable favour.”
— The Independent, read review

“For those of us who are suspicious of the claims of materialism it’s astonishing, and also heartening, to hear a scientist agree that it’s a hidebound ideology, dismiss the belief in determinism as a ‘delusion’ and call on the ‘high priests’ of science to abandon their ‘fantasy of omniscience’.”
— Robert McLuhan, read review

Interview by Alex Tsakiris on Skeptico

The Medium the Mystic and the Physicist: Towards a General Theory of the Paranormal, by Lawrence LeShan
BOOK REVIEW
The Medium, the Mystic, and the Physicist: Toward a General Theoryof the Paranormal
by Lawrence LeShan. Allworth Press, 2003. 320 pp.$22.94. ISBN 978-1581152739.
The Medium, the Mystic, and the Physicist
, ﬁrst published in 1974, reads asif it were published this week. The premise of this classic remains relevant  to contemporary parapsychologists and to those of other disciplinestaking part in the study of consciousness. LeShan describes his book as,“a story of adventure, as a search for the meaning of impossible events,”giving examples of anomalous perceptions from laboratory experiments,spontaneous cases, mediumistic cases, and from the psychotherapy settingwhich beg for a theory to explain them. This book describes his theory of the paranormal and the adventure of shaping this theory.
LeShan interviewed serious sensitives who had a high frequency ofparanormal events in their lives. During the years of LeShan’s inquiry, itbecame clear that at the moment when paranormal information was acquired(when “telepathy” or “clairvoyance” or “precognition” was happening),sensitives were reacting to the world as if it were constructed and “worked”differently than what we normally believe it to be. At those moments theyused a different metaphysical structure of the world than our ordinary,everyday, metaphysical structure.
LeShan identiﬁed two other groups, mystics and Einsteinian physicists,who reached the identical conclusion: that there are two ways of being inthe world, which LeShan calls the Sensory Reality for our usual way ofknowing, and the Clairvoyant Reality, independently described by thesegroups where information is gained other than through the senses, with aunity of subject and object and an experiential quality of deep wholeness.We get a chance to see this, almost intimately, by reading Eileen Garrett’ssessions with LeShan and in quotes from other sensitives, mystics, andphysicists, bringing the Clairvoyant Reality within our grasp.
Out of these ﬁndings a theory of the paranormal emerged. This is  based on the idea that each metaphysical system permits certain activitiesand events (which are “normal” when in the system) and does not permitother activities and events (which are therefore “paranormal” when you’rein it). In the everyday metaphysical system (the “Sensory Reality”), ESPis “paranormal.” In the other system (the Clairvoyant Reality”), ESP is“normal.” ESP-type events occur when an individual is relating to the worldas if its metaphysical structure were that of the Clairvoyant Reality.
(Continue reading here:   The Medium the Mystic and the Physicist

A Radical Argument Against Scientism