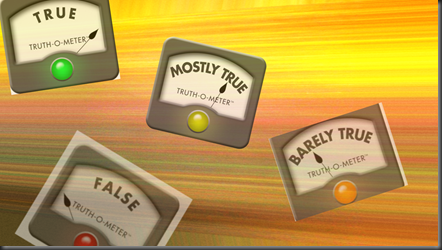 It is a widespread mistake to think, view, and react to people as if they are either all bad or all good, angel or demons. This is not how the world is built. Everywhere in nature and in human nature we find many degrees of characteristics, countless shades of gray, numerous degrees of light and shadow. People are mixtures of true and half-true, of half-true and 22% true, blends of partly good and partly not.

And so I announce a revelation, a scientific truth: the reality of RELATIVITY. Various degrees of good are in the mind, in the emotions, and in the of illumination of the soul. Everywhere are degrees of love and degrees of righteous, degrees of truth, characters of many qualities and shades.

The bane of right thinking is the foolish binary rooted in the lower emotions; it drowns the mind. The lower emotions can not see the good in the people it has named bad, nor can it see the bad in the people it has named good. What is this folly of radical and uncompromising idealism that leads us to react as if people are black and white, as if they are always angel or demons, friends or enemies. I suggests that outright angels and demons are exceedingly rare, and rare is the entity deserving such a radical name. But the prejudice for angels or demons is exceedingly common. The lower human emotion sees the world in black and white, and sees armies of angels and demons. We make our heroes the angels and we people the world with demons who oppose them. But this opposition is within ourselves, within our limitations and our unthinking emotional reactive natures.

I offer a cure and a step toward sanity. Instead of emotional reactiveness and knee jerk reactions, there is another way. It is right thought and the clarification of perception that follows it. It comes with the help of the new scientific revelation: RELATIVITY. The lower emotions are unable to comprehend and apply relativity. The mind however understands relativity, lives by it, and thinks in degrees and not in simplistic binary of good and bad, of blacks and whites. Let our lower emotions be still. In this stillness the mind can function. Then we being to see the amazing continuum that is life and people; then we begin to think.

A definition of cults, both obvious and subtle, with an explanation of their characteristics and pervasive nature together with the ways to avoid them.

Relativity is key to right understanding. Things are not true and false: things are–to some degree–true and false.

Every verbal formula is limited, being some distance from the light.

Recognition of paradox is key to right understanding. Everything expressed in words challenges the mind to understand a paradox.

Understanding does not make its home on the astral plane where relativity and paradox are virtually unknown.

We could say that people who do not comprehend relativity and paradox are fanatics. But that formula does not correspond well with the above affirmations.

Therefore, it is better to say that, to the degree that people do not understand relativity and paradox–to that degree–they tend to be fanatics, or at least relatively mistaken.

Definition of a Cult

Originally, the word “cult” suggested worship and was not pejorative.  In modern usage the word took on negative connotations.  The critical meaning of cult is, I believe, in part the result of the mental development of humanity, where the mind begins to see devotion in its glamorous or illusory expression.  Humanity turns toward the external, complicating the problem.   We humans, in this devotional cycle, become hero worshipers and sadly, often in the sense of idol worship.

The pure devotion of the soul descends into the personality, becoming superficially ritualistic, superstitious, exaggerated, and exclusive–in other words, we become false and cultish.  Even the word “cult” itself is used in a cultish way, e.g. a cult is what we call the religious brainwashing down the street from where we receive our own religious brainwashing.  “Wash” is the apt term, because water is the symbol of emotionalism.

Group-think is strong.  Reflecting on the list of attributes of cults, one might ask, “Are not most religions and new age movements cults?”  Have we not all struggled through life under the binding spell of one cult or another?”   We can look at this question in the light of useful concept:  degrees.  Applying it, we see there are not two categories:  “cult” and “not a cult.”  Rather we find that a great deal of human activity, particularly in the religious, metaphysical, and political fields, is cultish to some degree.  And the presence, to some degree, of one or a few cult-like attributes–and especially the less crucial ones–would not be justification for the strong label of “cult.”  As an exercise in critical thought, we could rate a given movement, assessing the prominence of each cultish tendency, on a ten-point scale.

The Size and Age of Cults

Some definitions of “cult” relate the word to small groups, but it is not the smallness of the group that is determinative, but smallness of mind.  There is tendency to think of cults as relatively small groups or minor swirls of activity within human society but sometimes small groups can be closer to the truth than large ones.  So size is not always relevant to cult status–there are large and small cults, and very new and very ancient ones.   Society may perceive a cult as something always outside normal or established human society, but large and long established cults also exist as an accepted part of society, even while not recognized as such by most people.  Actually, numerous large cults are imbedded in the fabric of accepted society.  Some of these have benevolent and attractive aspects, but careful thought shows how the dark threads of cult consciousness are woven in with the brighter threads of high ideals and humanitarian endeavor.

There are individuals beyond us in the scale of development and insight.  There are always those to whom we can look for inspiration and those to whom we can offer our help, however large or small that gift may be.  But we should not try to shift responsibility for the course of our lives to a group or a leader.  We should not—to put it in psychological terms–expect a leader or group to take the place of the ideal parent or family that we never knew, while we assume the role of a dependent child.  There is nothing inherently wrong with the fact that we are at a relatively undeveloped state compared to some ahead of us on the path of life.  The problem arises when psychological immaturity, left over from an unfortunate early life, leads us to surrender ourselves to an individual or group, instead of using relationships as the catalysis for the evolution of thought, love, and divinity within us.

A pseudo-teacher engages in a conscious or unconscious game of power, and is dependent on the weakness and worshipful attitude of followers.  That which is often most attractive to members of a group, a charismatic leader, tends often to encourage unhealthy dependency and hero-worship.  The development differential between a teacher and ourselves is an opportunity for an apprentice/master relation, and not an occasion for uncritical submission to authority.  Moreover, the Teacher and the Teaching are always as much within as outside us.  And it follows that without the inner teaching, the external is rendered a meaningless illusion.  It follows also that a good teacher is one who encourages competence and independence in us, so reducing the distance between pupil and teacher.  Such a relationship is the antithesis of cultism.