The Brotherhood of Light is the ultimate source of spiritual guidance. (image by the author)

Lucis Trust offers the following brief summary of The Brotherhood of Light:

Throughout time, the idea of a group of wise and enlightened beings working behind the scenes to guide our planet has been conveyed in spiritual teachings, in literature and myth. The group has been known by many names, including the spiritual Hierarchy, the Masters of the Wisdom, the Elder Brothers , the rishis of India, and the Communion of Saints. During times of crisis in human affairs great teachers have emerged from the Hierarchy into the world of time and space. These have included Socrates, Shri Krishna, Mohammed, the Buddha and the Christ.

The Spiritual Hierarchy can be understood as reservoirs of lighted, loving energy on the inner side of life – a presence in the higher reaches of consciousness. They are the substance of what is often referred to as the Kingdom of God. Mystics and seekers of every faith have always known this. It is these energies and these Beings that shape the evolving sense of purpose and direction in human affairs, and that are awakening us now as a species to a new understanding of oneness.

I see that Erasmo Parra gave us a lengthy response to the question and he cited three sources: Alice Bailey, H.P. Blavatsky, and the “Ascended Master” concept or teaching. I think his his answer is commendable with one key exception, namely that the “Ascended Masters” teaching, as I explain below, does not really belong with the other two. The Blavatsky and Bailey Teachings are the primary sources for the teaching on The Brotherhood of Light, though there are numerous other secondary sources that support them including the Rosicrucian, the esoteric side of Freemasonry as well as many individual writers.

However, the Bailey and Blavatsky sources also resulted in numerous imitators whose teachings are in the nature of a distorted reflection with irrelevant and erroneous things being inserted and essential things being left out. The phrase “Ascended Master” originated in the “I AM” movement about which Bailey wrote:

The Masters brought before the general public by such movements as the I AM movement are a travesty of the reality. The Masters portrayed in the many theosophical movements (since the time of H.P.B.) are not distinguished by intelligence and show little judgment in the choice of those whom the organizations claim are initiates or important members of the Hierarchy. https://www.lucistrust.org/books…

Likewise, in the Theosophical tradition that Blavatsky originated, Pablo Sender offers the following insightful critique of of “Mahatmas versus Ascended Masters.”

The phrase “Brotherhood of Light” has a number of synonyms and these include: Hierarchy, Spiritual Hierarchy, The Masters, and The Lodge. This Brotherhood or Light or Spiritual Hierarchy is the original source that inspired all of the great religions and cultural evolutions of humanity. Behind the evolution of the world is a brotherhood of light. Behind humanity, events, nations, cycles of history, is a mysterious source of inspiration. It is the Hierarchy of Love and intelligence, a brotherhood of enlightened souls who lead and who are the goal and guiding light of humanity. Ralph Waldo Emerson spoke of it as, “…that lofty and sequestered class who have been its prophets and oracles, the high priesthood of the pure reason, the Trismegisti, the expounders of the principles of thought from age to age.” They are transcendent; participants in super-nature, “…the privilege of this class is an access to the secrets and structure of nature, by some higher method than by experience”.

They were and are men, yet now more than that. Through many lives, they came by way of natural human evolution. They are called “Masters,” because they have mastered nature and achieved vast knowledge inclusive of yet transcending all the accumulated knowledge of all humanity. The Masters are human, yet not limited by human faults. They are divine, but not all-powerful. They are masters of wisdom, mediators of powerful spiritual energy, of divine love and intelligence. The Hierarchy, as a brotherhood of knowledge and enlightenment, are instrumental in the evolution of life, including but not limited to human life. They manifest spiritual luminosity; a mastery of self–of all things physical, emotional, mental.

We understand life as unfoldment of consciousness. So man, by evolution, transcends the animal, and the spiritual Hierarchy of our world, by evolution, transcends the human. Hierarchy is true consciousness, and by our approach to it we come to understand what it means to be awake, to be alive, to be truly conscious. So, humanity becomes a future Hierarchy. Hierarchy is a unity, a collective light behind and through the foundations of all things benevolent. The existing good in human arts, sciences, and societies, the good of all human creativity in the world, is in reality a blend of human with Hierarchical light. The light of world civilizations, seen from space, is the symbol of both our light and theirs. The collective aura of humanity grows luminous in the approach of Hierarchy. Their visitations support the long march of human history. Their power–in concert with our best efforts–stands as guard and guide in struggle of light with darkness.

Hierarchy is an integral part of the aura of the Earth, and the soul of humanity, that slowly awakening light, is also integral to that same aura. So, behind the scenes, members of this Brotherhood are active in fostering the spiritual and cultural life of nations.

They rarely come before the public eye, and when they do are not generally not recognized other than by those closely affiliated with their work. People usually see–not the members of Hierarchy–but their agents or disciples. These disciples work in the world by intuition, being spiritually impressed and often without conscious knowledge that they are disciples fulfilling a mission. Others are partly or fully conscious and clearly know that their labor on behalf of humanity is under the guidance of Hierarchy.

The work of Hierarchy and their agents in the world is not limited to what people usually call spiritual or religious work. Rather the entire field of human evolution is their field of service. Their activities embrace the light of right government, education, and all the sciences and arts that constitute human culture.

These true teachers guide, inspire and educate, but do not coerce or force humanity. Individual freedom, especially mental freedom, is never infringed. A key consequence of this is that their disciples can make mistakes in the way they represent themselves, their teachings, and the nature of Hierarchy itself. To attempt to correct all mistakes would itself be a violation of human freedom. So, Hierarchy is not an imposition, but a bridge to the future.

(The above “Definition” is adapted from my script for the video:

There are, as indicated above, numerous narratives in history about the role played by The Brotherhood, but perhaps the most notable example where we have a detailed record is relate in the book The Comte de St. Germain: Isabel Cooper-Oakley. Another good narrative on the history of this can be found here The Count of Saint-Germain. 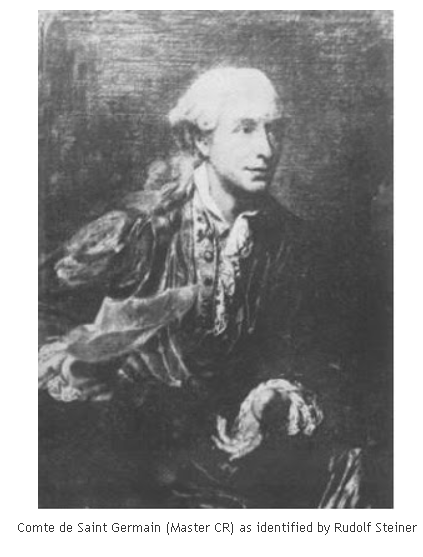 Among the secondary narratives there is also What is the Spiritual Hierarchy? by Barbara Y. Martin and Dimitri Moraitis. They offer the following well written definition:

Every society has had its belief in divine support. Angelic beings have been a running theme throughout the Bible as messengers of God… devas, dynasties, and divine incarnations. Taoists have their pantheon of gods and divine ones. The gods and sacred beings of ancient Mesopotamia and Egypt played a central role in those societies. The Orphic and Elysian mysteries, with their mythology of the gods, were indispensable in the development of classical Greek culture and its golden age. In more recent times, mystics such as Helena Blavatsky, Max Steiner, Alice Bailey, Rudolf Steiner, and others helped reawaken an understanding of the spiritual hierarchy. Today, with the blossoming spiritual renaissance, many are taking a closer look at our relationship to the Holy Ones.

Whether religious or secular, the concept of invisible spiritual beings is part of humanity’s cultural heritage. They are a source of comfort, solace, and inspiration. Countless sages and mystics have claimed direct contact with these Holy Ones. And the ancient spiritual training centers of the world—the mystery schools and ashrams—shared a common goal of helping the aspirant achieve a direct connection to the divine. Today, with the material scientific perspective, some look at the subject of the spiritual hierarchy as outdated myths or folktales. To them, angels and archangels are not relevant or a worthy subject for the modern mind. Yet this is the furthest thing from the truth. As we better understand the physical world we live in, it becomes even more essential to understand the spiritual roots that support and sustain our physical life. Of all the aspects of metaphysical study, the spiritual hierarchy can be one of the most difficult to approach in a clear and levelheaded way. Part of our challenge in understanding the spiritual hierarchy is that there is much confusing and conflicting information, depending on which system you follow. Various religious and metaphysical schools have their own interpretation of the hierarchy order, and sometimes these schools will be in apparent conflict or even antagonistic to each other. This is often due to centuries of less inspired hands reinterpreting ancient revelations. The approach in this book will be syncretistic. As the Rig Veda states, “The One Truth the sages call by many names.” By understanding the common thread that runs through the various spiritual systems, we can better appreciate how the Holy Ones are universal for all of us. There are three ways to define the spiritual hierarchy that we will explore in this book:

• A network of celestial beings under God

• The hierarchical order of life

• The hierarchy of Divine Light

A Network of Celestial Beings under God The spiritual hierarchy is the administrator of God’s divine plan. They are responsible for carrying out the various duties of creation. This holy order ranges from advanced souls in the human kingdom to glorious angels, archangels, and planetary leaders. We will pay particular attention to angels and archangels, yet there are other aspects of the Higher that exert an enormous influence as well.

These Holy Ones have been on the spiritual path for a long time, many for eons, and have evolved enormously. They work to uplift humanity and form the evolutionary link connecting us to God. These exalted beings work on different levels of unfoldment, which is why it’s called a hierarchy, yet all work in perfect harmony with one another. Together, they form the evolutionary chain that links all life from the simplest amoeba to the most radiant archangel. We need these great beings as they are our link to God, and God works through these wonderful beings, guiding and steering the entire process of evolution.

2 thoughts on “Someone asked, “Who is the Brotherhood of Light?””